A couple of months ago I took part in an Opinions and Lifestyle Survey for the Office for National Statistics. Prior to this, a letter had arrived in the post saying I had been selected from 63,182,000 “to help shape Britain today and tomorrow.”

Enclosed with the letter and explanatory leaflet was a book of first class stamps as a thank you or perhaps encouragement to take part. For me, neither postage stamps or an appeal to my citizenship was necessary. As a writer of contemporary realism, numbers feed my hunger to know the habits and tastes of my fellow nation-dwellers and this was a real chance to glimpse behind the scenes.

The friendly woman with her official badge who had turned up on my doorstep one evening returned on the day we had agreed for the interview. I said this was my first ever survey and she said this was the first time she’d interviewed a novelist. I like to think that she seemed pleasantly surprised by my enthusiasm and we settled in the living room with mugs of tea, a fat file of question cards and my attention-seeking cocker spaniel who the lovely Dorothy was very patient with. 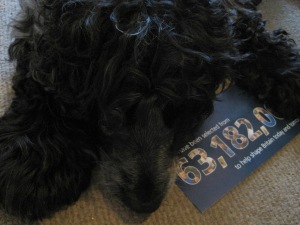 Questions on air travel, airports and flying, on tax evasion or was that avoidance? on alcohol, on my use of IT, were just some of the subject areas in an interview which lasted well over an hour. My enthusiasm waxed and waned: questions didn’t allow for context, the structure of the answers didn’t cater for nuance but it felt good that someone was asking these questions and that somewhere, later, out would pop a batch of fresh statistics.

These days everyone’s collecting data: service industries, financial institutions, shops and supermarkets, as well as, of course, the mother of statistic gathering: the government. What kind of tea I had supplied Dorothy with, and which make of kettle I use, is no longer purely my own business.

Big Brother omniscience is the sinister aspect to insatiable data capture but the flip side is that we now have access to the strangest information.

A few months earlier, at Christmas time, I’d enjoyed Damian Carrington’s article in The Guardian about the ‘Christmas Effect’ on the National Grid. While capitalism promotes the individual, statistics prove that common behaviour remains heavily in play. I relish the thought of “TV Pickups” – the national heaving of bums off settees as we head towards the kettle while TV credits roll after a popular programme or the fact that for the grid, Boxing Day morning is the “most peaceful national moment of the year”.

In the same issue of the paper there were also statistics about people who had split off from the herd. On Christmas Day in 2012, 392 people bought a car on eBay, 1,548 filed their tax returns while 674 died.

Setting the idiosyncratic against common behaviour is a gift for a writer. Behind those numbers are stories of heartache, boredom, loneliness and excessive pragmatism.

View all posts by sarah jackman